I wish you good health and all the best in the New Year.

Here are a few personal comments: In the 1970’s when I got involved in the dynamic analysis and safety assessment of concrete dams – most of the Swiss dams are concrete dams, which have an average age of about 75 years – some dam engineers believed or hoped that by means of earthquake prediction or early warning it would be possible to ensure the seismic safety of dams. However, it turned out that this was a pipe dream and is still an unattainable dream today as hardly any progress has been made in the last 50 years in the prediction of strong earthquakes, which includes the prediction of their magnitude, place and time. If prediction were possible, then the reservoir could be lowered before a strong earthquake occurs. About 20 years ago, two earthquake early warning systems were installed by us for the Ignalina nuclear power plant in Lithuania and the city of Istanbul in Turkey. These systems included seismic sensors installed around or in the vicinity of these sites and provided theoretical warning times of less than 10 s. It is obvious that within this short period of time no actions could be taken at large storage dams except for alarming the people living downstream of a dam. Therefore, dams must be strong enough to withstand the strongest ground motion expected at a dam site, which is the current seismic safety concept of ICOLD.

Until recently, it was thought that the seismic safety of dams was assured when the dam body could resist the effect of ground shaking. This is still correct but, in addition to that, it must be realized that during strong earthquakes, besides ground shaking, landslides or rockfalls may occur, blocking intakes of spillways or low-level outlets, which must function after the earthquake or may lead to impulse waves in the reservoir that could overtop the dam crest as, for example, in the case of Vajont dam in Italy in 1963. In addition, the possibility of movements along faults or other discontinuities in the footprint of a dam must be investigated, which, for concrete dams, would have more severe effects than ground shaking. Besides the dam body, the following structures must also be safe and have to withstand the same seismic actions as the dam body: (i) spillways and low-level outlets must function after strong earthquakes, (ii) the stability of wedges in the dam abutments must be ensured, which is of main concern of arch dams, (iii) the stability of slopes, whose failure may block the intakes of spillways or low-level outlets must be checked, and (iv) the stability of potential landslides in the reservoir region or even in the catchment region, which may create large impulse waves or extreme floods or debris flows have to be checked. These are safety aspects, which have hardly been considered up to now. These new requirements are a direct consequence of the comprehensive seismic safety concept, which includes the following:

Some of these ideas may have been discussed before, but important tasks must be repeated.

In the past year I gave or contributed to several online seminars and workshops mainly in India, and also in China and Indonesia. It is important that the information gained from our ICOLD committee be disseminated among dam engineers and people in charge of dam safety in “earthquake endangered countries” and countries, where large dams are being built. I also visited several dams and run-of-river power plants in Switzerland and along the Swiss-German border. Due to the floods in mid-July, requiring the release of large amounts of water, the visits of run-of-river power plants were very spectacular. However, even more spectacular were the six waterfalls in the famous Swiss Lauterbrunnen valley with a height varying between 260 and 420 m.

With my best regards and best wishes for 2022 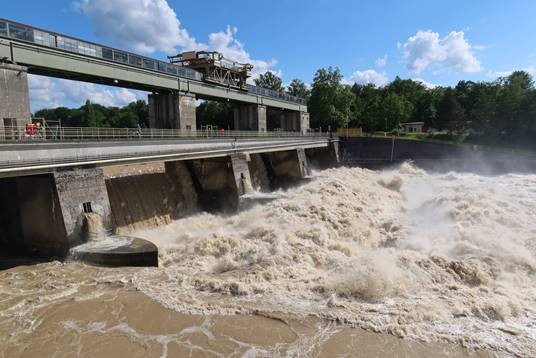